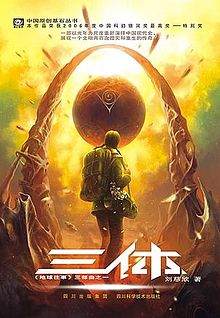 The blessing of being in your thirties is that you really stop apologizing for who you are. When I got to China I pretty much had no problem telling people those few things that I was into, and that they could kindly go away if they weren’t into the same thing[1]. I have had no problems labeling myself as a massive fan of science-fiction and an amateur author as well. So in that I am living in China and a fan of science-fiction people were almost literally jumping out of corridors to recommend Cixin Liu’s The Three Body Problem.

Well, my finishing the book was rather serendipitously timed with the scientific discovery of an actually astronomical phenomenon similar to one described in the book.

But I actually rather enjoyed it, for the most part. Or perhaps it would be better to say that I enjoyed parts of it. The book opens up with an interesting description of the cultural revolution which I was shocked to find in a  book written in China for a Chinese audience. But, considering I started this book a couple of months into being here, it was wonderfully informative about exactly what that period was like here in China. In fact, it gave me some edge in understanding some of my students.

There was also a few parts where you get what I thought of as some half-heartedly disguised political notions of the ‘western’ political system being bad. This actually comes towards the end when we meet the alien race, and they seem to have little regard for individual human lives. This is, as far as I can discern, how China believes the Western world to be. But I am not too sure about this and so I will not talk about it a length.

Ok, but there is some bad to it. And this is the kind of book breaking bad that really infuriates, although it may be because of my education in Semiotics that this is the case. The author of this novel, Cixin Liu, is likely very brilliant when it comes to the sciences he knows, but leaves an extremely large failing in what I think is merely his everyday reasoning. At some point a message is sent from our planet to another, and it is sent in a what is refereed to as ‘self-interpreting code’. This is extremely stupid, but alas absolutely necessary to the story’s plot. There is no such thing as a ‘self-interpreting code’, and to my ears at least it has the kind of stupid ring to it that I am sure physicists are used to hearing all the time in science-fiction. The notion that a code, which is something more abstract than concrete, could have the faculty by which they could interpret something[2], is fucking ridiculous. Anyone who knows anything about how language works sees this as a massive impossibility, much the same way that physicists see faster than light travel as impossible, no device will change this, my fingers are in my ear na na na na na na na na I can’t hear you na na na na na na na na. The brief answer to all this is that all the meaning in our language is arbitrarily coded into our language by our experiences, and no code (no matter how ‘self interpreting it may be’) would be able to take our experiences and translate to something that could be understood through the experiences of someone completly alien to the experiences of the first.  The whole notion is just ridiculous, and feels like the hand waving off of a large story point. He might have well have said “REVERSE THE POLARITY OF THE NEUTRON FIELD” or, perhaps even simpler, ‘it happened by magic’. The signal that was sent from earth can be codified into a code by the sender, but that very same signal cannot later translate itself into a new code “the language of the aliens” all by itself. Even if something like a code has the agency to do such a thing it would have no way of knowing the code it would be translating itself into (in this case the alien language). The whole thing was very very bad, and it practically broke the book for me.

But overall? It was 3/4 of a good book and what the hell, that’s pretty good now a days.

[1] I have a great little anecdote about this. A guy shows up to my school for a period, and it becomes obvious that he is there just looking to make foreign friends, because that has some kind of currency in China. Anyhow, he constantly wants to hang out, and I can tell from the Gucci shoes and the Luis Vitton shirt that we are going to have nothing in common. He is in fact a massive douche bag, and it shows, particularly in the fact that all he ever wants to do is go ‘pick up girls’. I have no idea how one is meant to tell a person that he finds pretty much all the females in this country to be completly unattractive, and I considered just telling him I was gay to get the guy off my back once and for all. Despite his constantly showing up to my informal chat classes, he seemed to have nothing to say short of how we should hang out. I have no idea how the friend vetting process works in China, but this guys wasn’t taking the hint that my ignoring his constant text messages meant I had no desire to see him outside of a work capacity. Finally it occured where someone interesting turned up to one of the chat classes along with this troglodyte. Me and the other guy nerded out and talked about movies, books, and actual things I cared about while the annoying guy sat, listened, and felt awkward. He left, claiming he had something to do.

[2] I feel dangerously close to an argument here with some of my biosemiotics peers from my past. So seeing that this is a) my fucking blog and b) a blog that nobody fucking reads anyhow, let me have my say. I can imagine someone bring up DNA as a self-interpreting code. In fact, as far as I can tell the whole field of biosemiotics pretty much hinges on this massive misinterpretation of the notion of DNA being a code.